Case study on an emerald bead: Is it from the ancient mines in Egypt or not?

Case study on an emerald bead: Is it from the ancient mines in Egypt or not? Published in Journal of Gemmological Association of Hong Kong GAHK, 2015, 35, 46-49.

The influence of pearl oyster farming on reef fish abundance and diversity in Ahe, French Polynesia 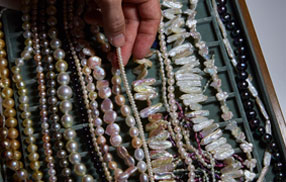 DNA Fingerprinting of Pearls to Determine their Origins

Abstract: We report the first successful extraction of oyster DNA from a pearl and use it to identify the source oyster species for the three major pearl-producing oyster species Pinctada margaritifera, P. maxima and P. radiata. Both mitochondrial and nuclear gene fragments could be PCR-amplified and sequenced. A polymerase chain reaction-restriction fragment length polymorphism (PCR-RFLP) assay in the internal transcribed spacer (ITS) region was developed and used to identify 18 pearls of unknown origin. A micro-drilling technique was developed to obtain small amounts of DNA while maintaining the commercial value of the pearls. This DNA fingerprinting method could be used to document the source of historic pearls and will provide more transparency for traders and consumers within the pearl industry.

Tracing cultured pearls from farm to consumer: A review of potential methods and solutions

Tracing cultured pearls from farm to consumer: A review of potential methods and solutions. Published in Journal of Gemmology, 2013, 33, 7-8, 239-246.

New developments in cultured pearl production: use of organic and baroque shell nuclei

China’s pearl industry: An indicator of ecological stress. Published in the Journal of the Gemmological Association of Hong Kong GAHK, 2013.

Cultured pearl farming and the production in the Federal States of Micronesia. Published in Gems & Gemology, 2012.

Abstract: A range of different materials has already been used as cores in beaded cultured pearls, and now two new alternative options, baroque shaped shell beads and Chinese freshwater cultured pearls, are being used. Experiments with beads of the latter, approximately 6.5 mm across, have been carried out with marine Pinctada maxima and Pinctada margaritifera oysters. After 13 months, nearly 200 pearls of each kind were harvested. Cross sections and further observations of resulting pearls are described. X-radiographs and X-ray microtomography are found to generally deliver clear evidence for identification. These pearls have beenfound to be very suitable for subsequent drilling. Natural pearls also have been used as nuclei for producing cultured pearls. The material used is either non-nacreous, brown or of an unattractive appearance. This new kind of cultured pearl is diffi cult to identify, because the radiographic structures of the natural cores are masking these cultured pearls.

Download PDF
We use cookies to ensure that we give you the best experience on our website. If you continue to use this site we will assume that you are happy with this.Ok